When we reached Papanasam, I was totally disappointed to see the place. Because I expected some thing quieter and scenic. I asked Shri is this what we were supposed to see after such long journey? The place looked as if in total chaos. In dismay we entered the temple but surprisingly it was quiet with not many people inside. We started admiring a monkey as he opened the bottle with such ease to drink some water? But his efforts went in vain as the bottle was empty. After few minutes we took eyes off him and gradually made a move. That is when a monkey came swiftly towards Shri. It became a very usual scene whenever we went out. For whatever reason monkeys liked chasing her. She was terrified and tried driving him away but he rushed to her aggressively. I watched for a little while and finally realized, "Gosh, I got to do something than just merely watching". I joined her in shooing him away but he came closer and snatched the water bottle from her. He ran off picking the bottle and settled in the same place. He hurriedly opened the bottle and spilled water while attempting to drink. I told her jokingly, do you know that animals can sense well the energy emanated from humans? Perhaps your aura was negative and that is why he reacted this way. But actually the whole struggle was for water. Poor thing felt thirsty but guess was too lazy to leave the temple and drink as plenty as he can from the river itself. Or perhaps was frustrated with humans polluting the river and chose bottled over river? 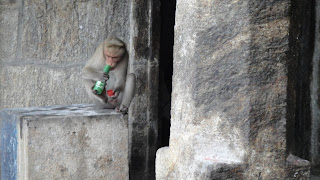 After this encounter, we were little taken aback to really go around the temple because the temple looked like their home with too many of them jumping/walking everywhere. Despite the fear, she decided to enter inside to offer her prayers. I just kept wandering around hesitantly until she was done with her prayers. After which we came out and asked the local rick people from the auto stand for the timing of the bus to Kariar. We found we still had plenty of time to get the next bus and wondered how to pass time. We walked little further towards the ice vendor and bought two mango ice sticks to chill our throats from the scorching sun.


By now I almost gave up going up towards Kariar thinking what if we do get similar experience there as well. While I pondered Shri asked me to call the officer (who we met at the petrol bunk a month ago) to know if we can go to Kunthakulam bird sanctuary. I listened to her and spoke to him briefly about our interests. After I spoke, he explained if we want to be in the forest then Mundanthurai is the right place because Kunthakulam is just a village. He also mentioned there are very less chances of getting accommodation now as we did not take prior permission. He said if we had informed 2 days in advance he could have helped with genuine interest. However, he referred fellow officer in charge of Mundanthurai and suggested to meet him anyway to check if they can accommodate in case of any availability of rooms. We also learned from him that mobile signals do not reach there and neither he nor us can reach Mundanthurai officer over phone. So no other choice but to go and meet him in person. We discussed if we should first go to Mundanthurai and meet him or go straight to Kariar and then on our way back to stop by and meet him. We stood confused unable to make a decision and by then the bus to Kariar (via Mundanthurai) arrived. We boarded the crowded bus with same confusion and when conductor came I told her the last stop is Kariar we will take the ticket till Kariar and if we like some place in between we will get down there. She agreed and took tickets to Kariar. But with in few minutes we decided on option two to go to Kariar and on the way back to stop by Mundanthurai and enquire as the place seemed to be promising.

Although the bus was crowded it passed through wonderful lush green forest which wowed us and we were pretty hooked to the scenery. When the bus reached sorimuthian temple few people got down and there was more room for air. We could get only one seat and I made her sit. While I decided to stand, one of the ladies from the first seat offered to share her space. I was pleased by her offer because there was only space for two which had already been occupied by her and another one. However, I refused gently thinking it would be uncomfortable if we shared. But then I decided to take it looking at her disappointed face and she gladly made space for me. We noticed people here were very friendly and helping. We got down at Kariar the last stop where bus halts and the dam was one kilometer up from the place we got down. We could either go by walk or take a mini van that takes people till the dam. We decided to walk and on our way we noticed a big rock on the side and it looked smoothened and wet (by rain?) which we started climbing for fun. After we climbed a little we heard lot of birds chirping from a particular tree. She suggested that we climb up till there and watch those birds. We climbed and she went ahead but I realized the rock was very slippery and decided to stop. I stopped and watched her climb up from where I stood, at the same time the driver of the van passing by shouted at us not to climb up and come down as it was dangerous.We climbed down and we started towards the dam again. 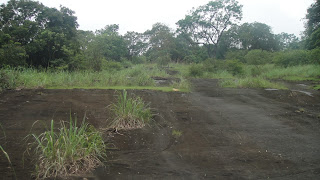 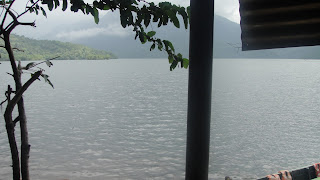 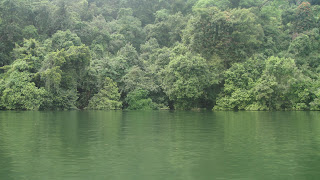 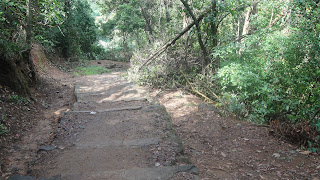 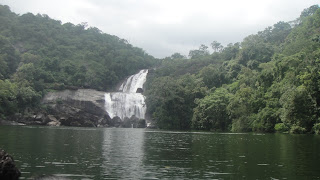 Upon reaching dam we took a boat ride to Banatheertham a beautiful falls. We had about one hour to spend there and the boat was supposed to take us back. When we took the boat we found ill-conditioned life jackets. We got off the boat and had to do a little walk to reach the falls. The path to the falls looked as if it was made splitting the forest. We walked through the trees all the way up hearing chilled voice of fall. Lot of people showered in the fall but it was terrible to watch them throwing used shampoo sachets into the river. We stood and watched the fall in silence and walked little further and entered the natural pool. The feel was just beyond words. I took water in both hands and threw on my face. The day was very hot and it was just the right thing at that moment. We came back from the fall and  met one of the forest officials at the entry gate and inquired about the procedure for accommodation in Mundanthurai. We also asked if he knew the officer whom we were planning to meet. He mentioned he knew him and he was not in-charge of Mundanthurai but Papanasam. He added there is no possibility of getting an accommodation and any way we could go and meet him. We knew by now all our plans collapsed. So we walked back to the bus stop thinking what next?
Posted by Sugirtha at 11:40 AM No comments: